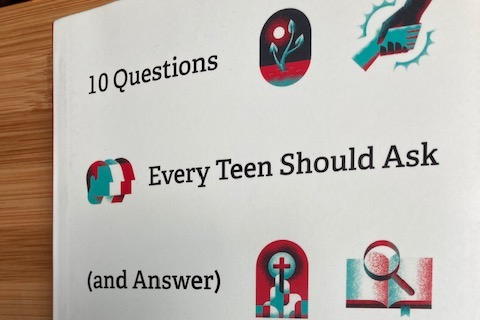 “Why aren’t there dinosaurs in the Bible?”

“What happens to babies when they die?”

“What about the ones that aren’t baptized?”

“How come the Bible says Adam was made from dust when we all know that we evolved from monkeys?”

“If Jesus was resurrected, why didn’t he just appear to everyone, why was it such a secret?”

Those questions aren’t from a recent college level Q&A session on Christianity. They are actual questions from my 3rd-5th grade Sunday School class, and the questions I’ve listed are far from exhaustive. While there is an admirable quality to “childlike faith,” there is no getting around the fact that children ask hard questions. If they aren’t asking them, there’s a good chance they are hiding them.

I believe in taking kids, of all ages, seriously. They are smarter than we give them credit for and they can handle so much more than we often give them. Of course breaking down concepts and keeping education fun are vital, but so is intellectually simulating children to take their beliefs seriously and to ensure that those beliefs are set upon a stable foundation. But it’s not always easy, for them, or for us.

What should we make of the relationship between science and faith? Is the Bible reliable? Can’t love just be love? Can God really send people to Hell? These are serious and relevant questions that Christians of all ages need to wrestle with. One fantastic resource is Rebecca McLaughlin’s Confronting Christianity: 12 Hard Questions for the World’s Largest Religion. I read through the McLaughlin’s initial book soon after it was published and then a second time with my community group. The book is well-researched, intellectually weighty, passionate, and persuasive. It’s no surprise that it won Christian Book of the Year by Christianity Today and was featured on TED Talks Summer Reading List. But could such a work be reframed for a younger audience without losing its persuasive appeal?

Simply put, McLaughlin did just that. In 10 Questions Every Teen Should Ask (and Answer) about ChristianityMcLaughlin takes high level arguments and structures them within the world of your average teenager without sacrificing the overall argument nor the beautiful appeals to a radical faith in Christ. With references ranging from Moana, to Taylor Swift, and to a whole lot of Harry Potter, McLaughlin expertly navigates the diverse terrain of common objections to Christianity that all teens are certain to face. She balances the difficult task of actually dealing with complex topics such as racism, abortion, evolution, pornography, and gender identity with an age appropriate delivery. As a gauge for discerning if a child is ready for the material contained within the book she claims that, “If your children aren’t ready for the entire Harry Potter series, they may not be ready for this book either,”1 and from someone who has read that series four or so times, I’d say she nailed that assessment.

One of the most impressive features of the book is her use of analogy to convey truth that will relate and integrate to a child’s cognitive atmosphere. For instance, one might be skeptical of comparing Hell with a Dementor’s kiss, but as long as we remember that analogies only go so far she makes her point:

Those familiar with Confronting Christianity will probably recall this section of that book and see how with just an added metaphor the concept is powerfully and memorably conveyed to a younger audience.

McLaughlin has spent much of her adult life engaging with objections to Christianity in a secular academic setting. She herself holds a PhD in Renaissance literature from Cambridge as well a theology degree. Yet, she has noticed a trend in much of Evangelical thought (one I’ve noticed as well) which she describes as, “One of my frustrations with apologetics over the years has been that it hasn’t always represented the best Christian thinking. We are often trying to take down academic fields without first listening to the Christians who are world leaders in those fields and leveraging their insights.”3 Much of McLaughlins work is framed around trying to be a bridge between the academic and the popular. One of her gifts is not weakening the structure of this “best thinking” but recasting it in a form that can reach a wider audience. Here in this latest book she has wonderfully recast such thought to fit into the intellectual and imaginative world of the teenager. Well done Rebecca, there is no book of its kind that I would recommend over it.